The $2.2 trillion HEROES Act recently passed in the House of Representatives on October 1. The bill passed by a 214 to 207 vote after several revisions from the original version proposed in mid-May. The bill proceeds to the Senate for a possible vote in the near future.

The HEROES Act marks the sixth bill introduced by Congress in response to the coronavirus outbreak. The original version of the bill totaled $3.4 trillion, and although the House passed it, the Senate declined to vote on it. After multiple revisions, the House passed it again with the hope that the Senate will reconsider.

Although the Senate is not expected to approve this version of the bill, there is a substantial focus on the restaurant industry in the bill.

We published a bulletin in August detailing how past stimulus bills have given attention to restaurants and bars throughout the country. Relief is critical to the restaurant and hospitality industry in our Southwest Florida community and the entire state of Florida.

According to the National Restaurant Association, there are over 41,000 eating and drinking establishments in our state. This adds up to nearly 1.1 million jobs in the industry, representing 12% of total employment in Florida. 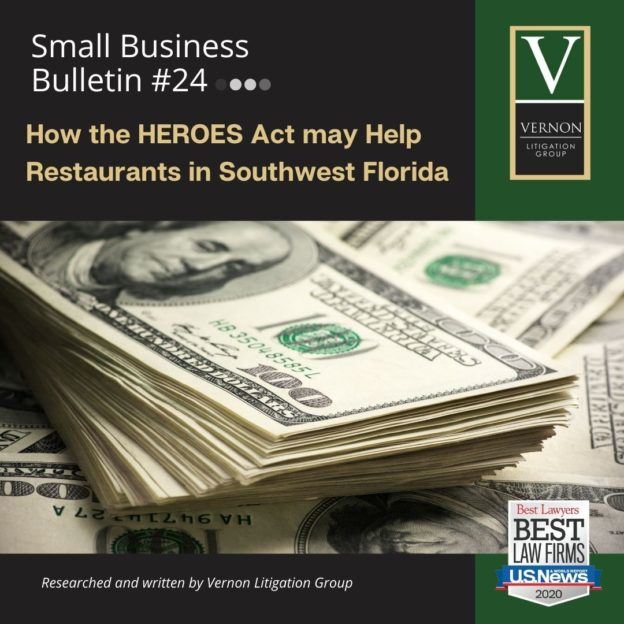 The RESTAURANTS Act is incorporated in the current HEROES Act. $120 billion of the $2.2 trillion bill is included as relief grants for the restaurant industry. According to Nation’s Restaurant News, the bill “is meant to aid independent restaurant, bar, tavern, and food truck operators” throughout the country. Chain restaurants with more than 20 locations are ineligible for relief from the bill.

The bill allows restauranteurs to use relief funds for “payroll and other eligible expenses,” according to a summary of the bill provided by the House of Representatives. Grants would be calculated based on “the difference between the business’s 2019 revenues and estimated 2020 revenues for each quarter.”

While optimism for Senate approval is low, this still shows signs of attention and hope for the restaurant and bar industry. Governor DeSantis’ recent announcement allowing restaurants and bars to run at full capacity will likely provide further relief and support for the industry in the near future.

As the size of the bill shrinks, the chances of passing may improve. Negotiations between both parties continue as the two sides look to reach an agreement. Senate Majority Leader Mitch McConnell cast doubt on passage when he said that support by Senate Republicans would be “outlandish.” There are reports that Republicans are planning to counteroffer at $1.6 trillion.

We will continue to keep track of any updates on this legislation over the coming weeks. This is an important development that may lead to improvements in Southwest Florida. If you have any questions at all regarding this recent development, we are more than happy to help you.