The nationwide movement for higher minimum wages has prompted Florida voters to take action in November. 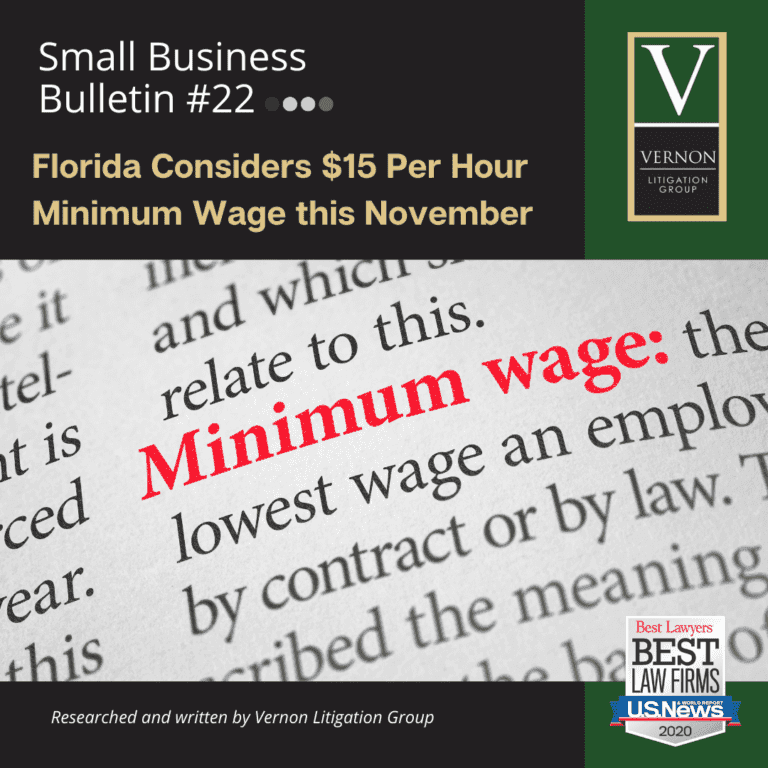 Amendment 2 must achieve 60 percent approval in order to take effect and raise the minimum wage accordingly. A recent Monmouth University poll shows 67 percent support for the amendment with 26 percent opposed and 6 percent unsure.

Minimum wage laws have directly threatened small businesses for years. While there are strong arguments for both sides of the issue, it is clear that wages would increase as a result. Higher wages lead to higher costs, and higher costs can make-or-break a business.

According to Oberlo, there are 30.7 million small businesses in the United States that create more than 1.5 million jobs per year, representing nearly 64 percent of annual job creation. Additional labor costs may lead to less hiring and less available jobs in the marketplace.

Thus, Amendment 2 is a crucial issue for Florida’s small business community. We have already seen a substantial amount of small businesses go out of business as a result of the effects of the coronavirus. According to Facebook’s State of Small Business Report, more than 30 percent of small businesses have closed their doors since the virus. Additional costs on top of another future shutdown could certainly lead to greater issues for small businesses.

Proponents of Amendment 2 claim that workers would be more productive if they have higher wages. The argument is that employees would feel more engaged and less likely to leave their jobs, which reduces turnover and further reduces hiring costs for small business owners.

Another argument for higher wages is that workers would have more money to spend on goods and services in the economy. As a result of more discretionary income, workers would be able to put their dollars back into the economy, potentially benefitting more small businesses in return.

Opponents of Amendment 2 claim that this will put more strain on small businesses throughout the state. “An increase like this would have disastrous impacts on businesses and individuals alike,” states Carol B. Dover, CEO & President of the Florida Restaurant & Lodging Association. Dover says that the amendment “will result in a 77 percent increase in labor costs” by the time minimum wage reaches $15 per hour in 2026. Florida’s current minimum wage is $8.56 per hour.

Florida’s hospitality industry is one of the largest and most important industries in the state. Throughout the past few months of restaurant and hotel shutdowns, we have seen large spikes in unemployment that have led to a significant number of permanent closures in this industry. If wages continue to increase, restaurants and hotels may not be able to absorb the cost.

Opponents of Amendment 2 cite a variety of unintended consequences as a result of this minimum wage increase. While workers will enjoy increased wages, small businesses will likely have to resort to prices increases or automation to make up for labor cost increases. This, in turn, could affect consumers and change purchasing behavior, which may further lead to small business closures and job losses.

For small business owners, this is an important amendment that is likely to pass in Florida. If Amendment 2 is passed, small business owners must prepare for increased labor costs over the next six years. Although this seems far into the future, it is crucial to start planning immediately on how to make up for these costs.

If you are a small business owner who needs further guidance on this development, we are more than happy to help you. Our contact information can be found here.